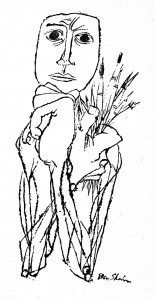 Shahn was a brilliant artist and illustrator, who to be blunt could draw his ass off. Simple lines captured both the human form and emotion in a way you rarely see.  He was born in Lithuania in 1898 into a family of Jewish craftsmen. His father’s anti-czarist activities forced the family to immigrate to the United States in 1906. Shahn grew up in a working-class neighborhood in Brooklyn. He became an apprentice in a Manhattan lithographic firm, finishing high school at night and later taking classes at New York University, City College of New York, and the National Academy of Design. Shahn saw his art as a means to combat injustice and raise social awareness. Throughout his career Shahn’s style retained the linear bias of a draughtsman, which proved to be effective in his satirical depictions of social types. He had his first solo exhibition at the Downtown Gallery in 1930, and his series of paintings of the trial and execution of the anarchists Sacco and Vanzetti established his reputation and led to further explorations of trials with political implications. Google him, check out his work, you’ll be glad you did.